CELEBRITIES from Spike Lee to Piers Morgan and Will.i.am have piled in to criticise Kanye West for his comments yesterday suggesting that slavery was ‘a choice’.

In a lengthy Instagram post, the director called his comments ‘uneducated’, while Will.i.am said his fellow rapper’s words ‘broke my heart’.

In an interview with TMZ Live yesterday, Kanye said: ‘When you hear about slavery for 400 years… for 400 years? That sounds like a choice.

Kanye has since tried to clarify his words, adding: ‘To make myself clear — of course I know that slaves did not get shackled and put on a boat by free will.

‘My point is, for us to have stayed in that position even though the numbers were on our side means that we were mentally enslaved.

‘They cut out our tongues so we couldn’t communicate to each other. I will not allow my tongue to be cut.’

The controversial rapper also likened himself to early abolitionists who took action to free slaves, and added: ‘The reason why I brought up the 400 years point is because we can’t be mentally imprisoned for another 400 years.

‘We need free thought now. Even the statement was an example of free thought. It was just an idea.’

But Lee and many others on social media were scathing in their response. 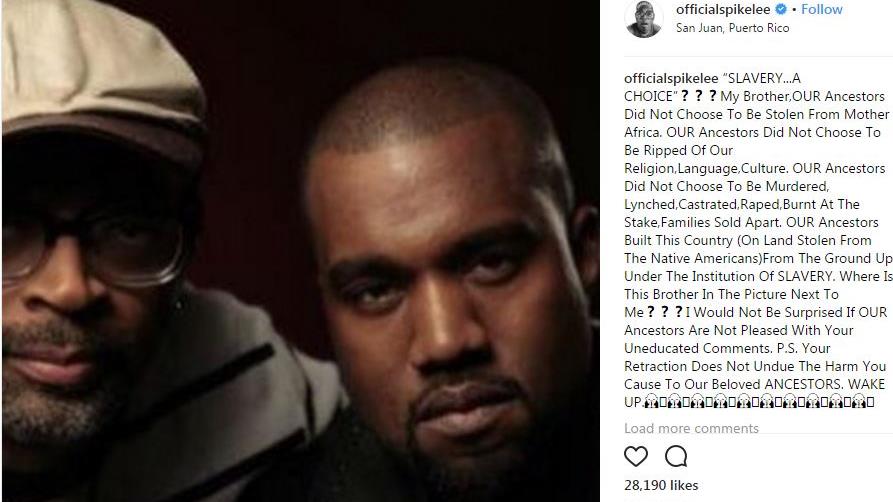 ‘OUR Ancestors Built This Country (On Land Stolen From The Native Americans) From The Ground Up Under The Institution Of SLAVERY. Where Is This Brother In The Picture Next To Me??? I Would Not Be Surprised If OUR Ancestors Are Not Pleased With Your Uneducated Comments.

‘P.S. Your Retraction Does Not Undue [sic] The Harm You Cause To Our Beloved ANCESTORS. WAKE UP.’

Interviewed on ITV’s Good Morning Britain, Voice UK star Will.i.am said West’s comments were ‘one of the most ignorant statements that anybody that came from the ‘hood could ever say about their ancestors’.

GMB presenter Piers Morgan later praised Will.i.am’s words, saying: ‘Wow. That may have been the most powerful 5 minutes in @GMB history. Thank you @iamwill for your candour & brutal, passionate honesty. I hope @kanyewest gets to hear it.’

Meanwhile, Britain’s Got Talent star David Walliams tweeted: ‘Please never utter another word @kanyewest I love your music & you are ruining it.’

West’s friend, the musician John Legend, retweeted a post that read: ‘Kanye’s rhetoric continues to fuel the racist right-wing folks who believe that black people are responsible for their oppression.’

Comedian David Baddiel also tweeted regarding comments Kanye made regarding the Holocaust, deadpanning: ‘So. Just a heads up, Kanye: that wasn’t a choice, either.’