Stephen Fry celebrates being in his Prime

STEPHEN FRY says he is happy ‘still to be here’ as he celebrates his birthday today — after a year that has seen him battling cancer.

In February, the former QI host publicly announced in a candid Twitter video that he had undergone surgery for prostate cancer, urging other ‘men of a certain age’ to get themselves tested.

But today he reassured fans that all is well, writing on Twitter: ‘Thank you all for your very kind birthday wishes. Happy still to be here to attain another prime number — 61.’ 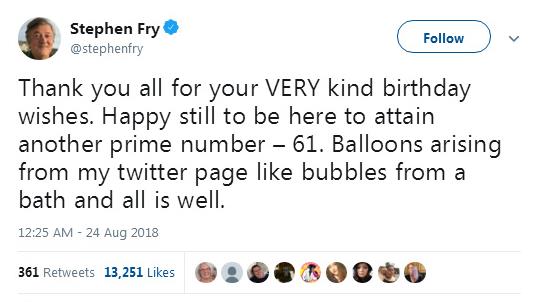 Fans rushed to wish him many happy returns, with one replying: ‘A prime number for a prime specimen of humanity.’

Another wrote: ‘Happy birthday, Stephen. You’ve invigorated the curiosity in me for so many things. I will always be indebted to you for that. Lots of love and good wishes.’

The TV presenter had his prostate removed in January after being diagnosed in December and later said in a video message on Twitter that ‘it all seemed to go pretty well’.

In the video, Fry said: ‘For the last 2 months I’ve been in the throes of a rather unwelcome and unexpected adventure. I’m sorry I haven’t felt able to talk about it till now, but here I am explaining what has been going on.’

He then went on to explain his ‘aggressive’ prostate cancer was discovered during a routine flu jab.

He added: ‘Cancer is a word that rings in your head. “I’ve got cancer” I kept saying to myself, good heavens. You’re not supposed to get cancer.

‘I know it’s a cliche but you don’t think it’s going to happen to you, cancer is something that happens to other people.’