BRIT rapper Stormzy was left feeling slightly foolish over the weekend when he took an April 1 prank too seriously.

On Saturday, BBC 3 bods sent out a Twitter message saying that broadcaster and naturalist David Attenborough would be presenting a new Grime music documentary — and Stormzy took the bait.

Alerted by fans to the tweet, he apparently sent the Beeb a scathing direct message.

But he must quickly have realised his mistake because he later tweeted sheepishly: ‘Sis, it’s April fools, we’ve been punked. Fuming.’

He did come round to seeing the funny side, though, later tweeting the Beeb a public apology alongside the tears of laughter emoji. 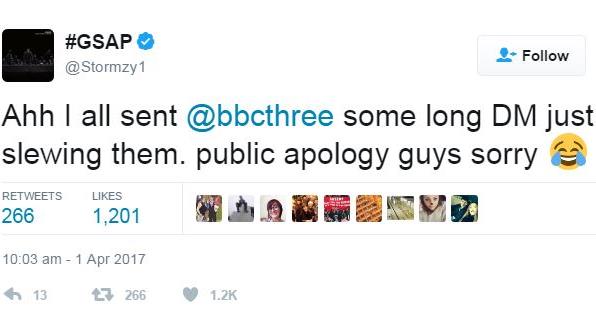