NO ONE could describe Stormzy as a loo-ser after he picked up a prestigious gong at last night’s MTV Europe Music Awards — but the grime star did manage to kick up a stink.

It all happened because the sensible lad wanted to use the facilities before performing Big For Your Boots — unfortunately, he took a wrong turn and ended up in the ladies’ loo, not realising until he heard female voices outside and it was already too late.

Stormzy being Stormzy, though, he didn’t keep the humiliation to himself. Instead he took to Snapchat to share the incident with his followers — from inside the cubicle.

Alongside a selfie with his hand over his mouth, he wrote: ‘Came to buss a s*** but accidentally when [sic] in the girls toilets so I can hear bare girls outside but if I pop out now imma look mad creepy.’ 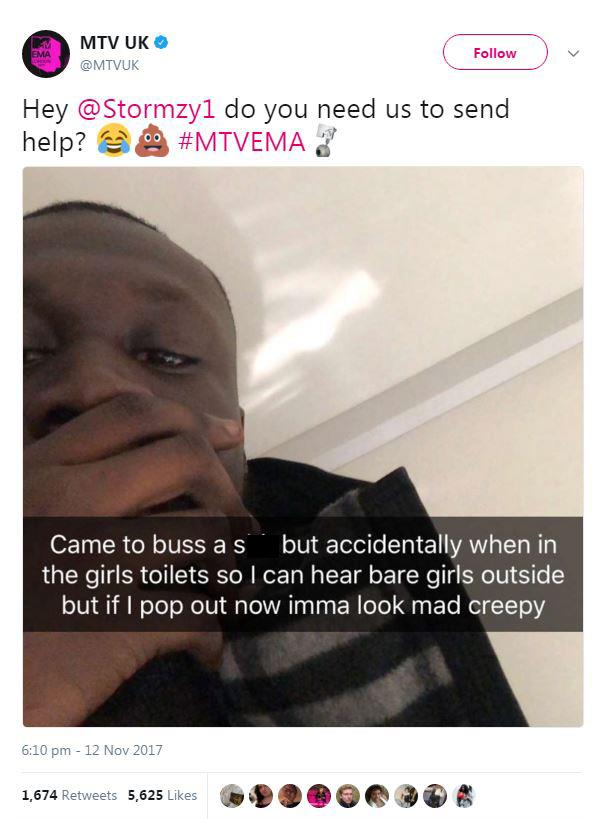 He then got a pal to give him the all-clear, sharing a screenshot of their text messages.

When his mate Kenneth told him: ‘Wait for one sec. Anne Marie is opposite brushing her teeth,’ Stormzy’s embarrassment was complete.

Luckily, the rest of his night was a lot more successful, as he gave a storming performance and picked up the award for Best UK and Ireland Act.