STRICTLY hopeful Susan Calman has hit out at ‘trolls’ after one Twitter-user branded her a pig.

Susan had a pretty pithy response when she posted a picture of herself all dolled up with dance partner Kevin Clifton and one cruel commenter posted: ‘They let pigs dance?’

She then followed this up with a defiant Beyonce gif alongside the caption: ‘I don’t often interact with trolls but occasionally I do. For years I thought I was fat and ugly. I’m not. And I won’t let anyone say I am.’ 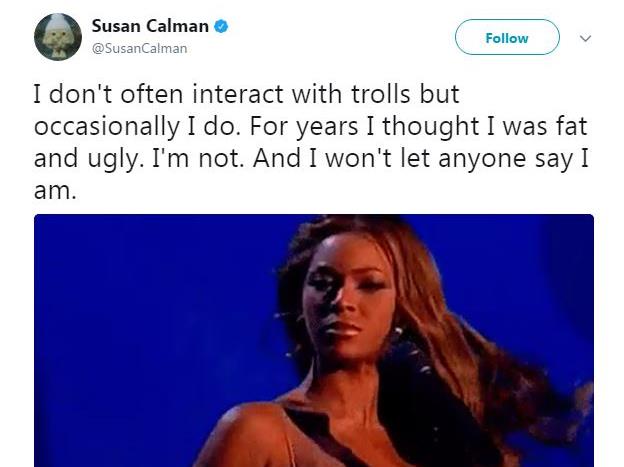 Fans were quick to voice their support, with one writing: ‘You’re brilliant and gorgeous and hilarious and I want you to win Strictly more than I want to eat cake every day. That’s a LOT.’

But Susan had the last laugh, posting a Ghostbusters gif with the words: ‘Anyway, I’m off to rehearse with a handsome man, preparing a beautiful dance for the biggest show on television. Suck on that, haters.’ 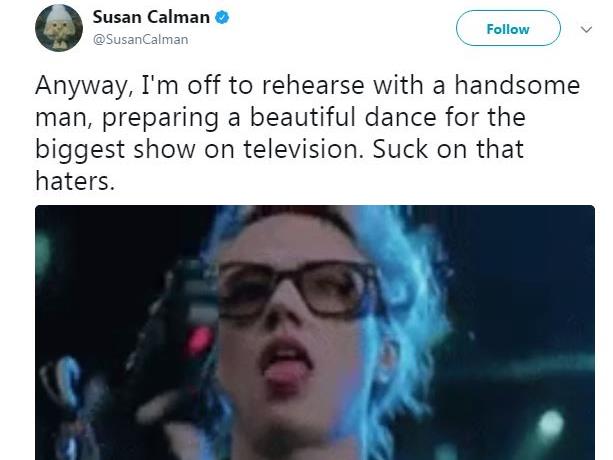 Calman has previously come in for criticism for not dancing with a woman, despite being gay.

But Judge Rinder helped her out on this subject, telling the Radio Times that the dance contest shouldn’t be ‘politicised’ by including same-sex couples.

‘There are plenty of organisations making a real difference to the lives of gay people around the country that do need our help, so why undermine the wonder of Strictly by politicising it?’ he said.

Rinder did agree, however, to dance with a man as a festive treat.

‘If it would satiate these Twitter trolls, I’ll offer myself up to dance with a man on the Strictly Christmas special,’ he said.