Ballas did not limit her comments to the dancers during last night’s results programme but turned her attention to the presenter, telling her to stop slouching.

Many fans of the BBC show went online to express their anger.

One annoyed viewer wrote on Twitter: ‘Oh my god how rude was Shirley to Claudia !? every week I’m liking her less and less tbh.’ 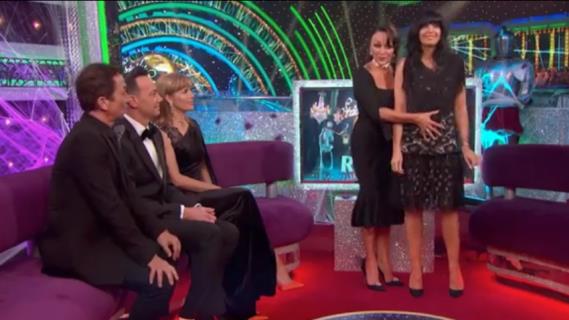 ‘Oh my god how rude is shirley shes like a headmistress prowling the halls watching peoples posture,’ said another.

However, others thought Ballas’s critique was hilarious.

One person called the moment ‘priceless’ and another said they ‘loved it’.

‘Shirley calling Claudia out on her slouching was EVERYTHING!!! We’ve been shouting that at the tv for years!’ said another.

Simon Rimmer was the latest celebrity to be eliminated from the competition.

The Sunday Brunch presenter received his marching orders after a dance-off against Mollie King.

Susan Calman takes Twitter break over ‘not so nice’ comments

CONTESTANT Susan Calman took a day off social media to rediscover her ‘joy’ after a series of negative messages from online trolls.

The comedian, 42, said she needed a break after receiving unpleasant comments about her weight and her moves on the dancefloor.

She said in a second tweet: ‘I’m not the most self confident person and I do take things personally. Taking the day off here to build up the joy again. Back soon xx.’

PREVIOUSI’m ready to star in Sia and the City