SUSANNA Reid has received a grovelling gift from boxer Tyson Fury after he ‘fat shamed’ her yesterday on TV.

It was during a segment about Tyson’s return to the ring that the subject of weight loss came up and the boxer put his foot in it.

When he explained that cutting out milk had helped him shed 4st, Reid asked: ‘So for anyone who wants to lose that much weight, you just reckon black coffee and no carbs?’

Then noticing that Susanna was herself sipping a coffee, the unfortunate heavyweight replied: ‘What kind have you got there?’

When she admitted it was white, he said: ‘Well, change it to a black coffee and you’ll lose weight…’ — before realising how that sounded and hastily adding: ‘Not that you need to!’

Susanna jokingly raised her fists and said in mock outrage: ‘I just got fat shamed by Tyson Fury. I feel bad about my coffee now.’

Not so bad that it stopped her eating a whole packet of biccies later that day, however: 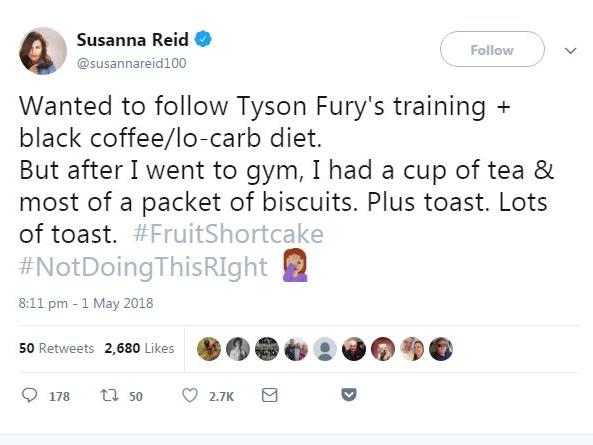 The boxer clearly felt bad too about his ill-chosen words as this morning he sent her a gift of coffee — with milk.

Reid revealed the apologetic gift on today’s episode, saying: ‘I have received a lovely present from Tyson Fury — it’s some coffee and, crucially, it comes with milk.’

She added that she ‘felt sorry for him’ after he came in for criticism over the unguarded remark.

Tyson had not included sugar in the package too, but some might say his note was sweet enough, as it read: ‘To Susanna — keep drinking it white, you look great on it.’

NEXTOh Baby, JT! Now we ‘know’ which Spice Girl got SexyBack then