BREAKFAST TV took an awkward turn this morning when Susanna Reid found herself seated between her current and former co-host.

Former BBC Breakfast presenter Bill Turnbull was reunited with his old BBC Breakfast colleague Reid as a guest on Good Morning Britain, and when she told current co-star Piers Morgan that she preferred working with Turnbull, viewers were quick to agree with her that they missed the mild-mannered news reader, too.

Turnbull had been invited in to talk about holiday habits of the over 50s and Morgan could not help taking a few swipes at his age, claiming to look much younger than his rival.

But when he asked whether Reid preferred Turnbull, she answered: ‘Yeah, I do actually.’

Morgan replied: ‘This is going to be a long morning, isn’t it? I preferred Amanda Holden to you.’ 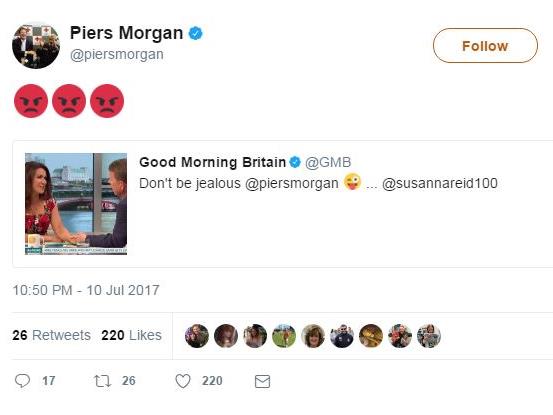 When Turnbull appeared in the studio, Morgan warned that things could get tense, but the old colleagues held hands and gazed lovingly at each other.

Turnbull said to Reid: ‘How lovely to see you my darling, I’ve missed you, is everything OK?’

Viewers were touched by the emotional reunion.

And plenty of viewers then came forward to say that they preferred Turnbull to Morgan too.

Good Morning Britain tweeted a shot of Reid and Turnbull looking happy together and told Morgan not to be jealous, which prompted an angry face emoji reply from him.

Those watching the awkward exchange tweeted that they could see why it had been an uncomfortable few minutes.

PREVIOUSRihanna comes out as Cara Delevingne’s number one fan