Take Me Out lad died after filming show

TAKE Me Out host Paddy McGuinness said Saturday’s show was a tribute to a contestant who died after the episode was recorded.

The comedian tweeted that Charlie Watkins, who is believed to have taken his own life, was ‘a fantastic lad’.

ITV had sought permission from the 22-year-old’s family for the programme to be aired. 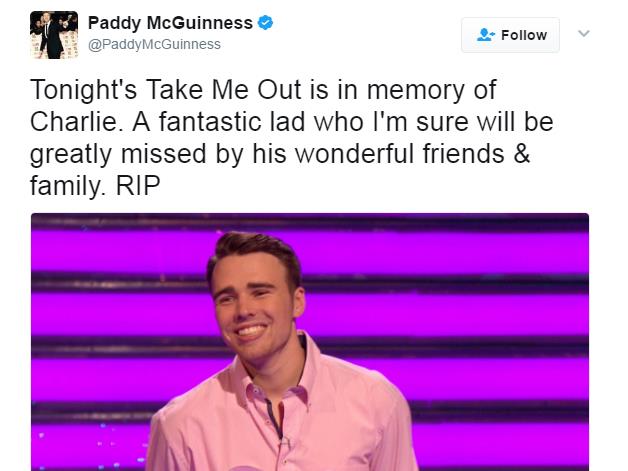 The family said in a statement: ‘We have lost a very special young man who sadly never recovered from the tragic loss of his mother when he was only nine years old.

‘This is another example of the mental health issues suffered by young people today, as highlighted by the Heads Together campaign.’

York university graduate Charlie, from Colchester, Essex, died in March. On the show, he beamed as he picked contestant Jo-Tara to go with him on holiday.

PREVIOUSI’ve got your back… Gaga gets lift-off dancer