VICTORIA BECKHAM insisted she and husband David are ‘stronger together’ as she tackled cheat rumours surrounding the footballer for the first time.

Painting a picture perfect image of family life, the couple posed for Vogue magazine as their four children and pet dog play beside them.

And pop singer-turned-fashion designer Victoria used the article to shoot down internet rumours about her ex-footballer husband, calling claims he has cheated on her ‘bulls***’. ‘People have been making things up about our relationship for 20 years, so David and I are used to ignoring the nonsense and carrying on as normal,’ the 44-year-old said.

But she admitted the gossip had hurt their family and friends. ‘These things have a wider effect on the people around us, and that’s unfair,’ she added.

It is not the first time the couple, who have been married for 19 years, have been rocked by ‘affair’ rumours. In 2004, it was alleged David cheated on his wife with ex-PA Rebecca Loos. 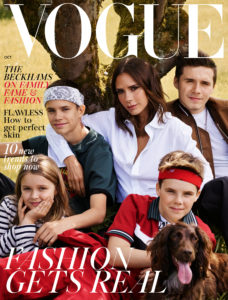 But Victoria insisted the scandals made them realise they are stronger together. ‘It’s all about the family unit. We are much stronger the six of us, than we would be if we were individuals. We respect that family bond. That is key.’

On the success of her business empire, she said: ‘Talk about being an underdog. I was bullied. I wasn’t that clever. Everything you wanted to be — that popular girl — I was the complete other end of the scale.’

She added she has always been a battler and is adamant ‘everything I am doing is very honest’.

In a show of unity last night, David said he was ‘so proud’ of his wife, insisting her biggest achievement ‘is what you see in this photo’.

Read the full interview in the October issue of Vogue, out on Friday.

NEXTJoanna Lumley: I suffer from a ‘nameless dread’