Victoria Beckham: Elton John is the reason I stopped the Spice Girls

VICTORIA BECKHAM has revealed that we have Elton John to thank for her resistance to reuniting with her fellow Spice Girls.

Speaking to Vogue Australia about her time in the band, the singer-turned-fashionista confessed seeing the Rocket Man singer perform live made her realise she was ‘wasting’ her talents.

‘I was with Elton John this weekend and I told him, “You’re the reason why I stopped the Spice Girls,”’ she explained.

Victoria, formerly known as Posh Spice, goes on to describe how seeing Elton on stage was a lightbulb moment for her.

‘I went to see him in Vegas in doing The Red Piano, where David LaChapelle curated the most incredible show with him, and I remember sitting there very near to the front and looking at him singing those songs he’d sung time after time, year after year, and his passion and his enjoyment was incredible, even after all that time,’ she said.

‘And a few nights later, I was on stage at Madison Square Garden with the Spice Girls and I thought: “It’s almost like a waste that I’m given this opportunity. I appreciate the time I’ve had with the girls, but I don’t have what Elton can have after all these years.”

Elaborating on her lack of passion for reforming the group, she said: ‘There was nothing there, other than that my kids were in the audience and I wanted them to see mummy doing the Spice Girls.’

Victoria also revealed how a recent catch-up with the ladies reminded her exactly why she wasn’t keen to revisit the past.

‘I had a lunch with the Spice Girls a few months ago to see how everybody was, things spiralled out of control, and I had my lawyer trying to beat down stories that were completely ludicrous,’ she said.

‘It was a reminder of how awful that was.’

According to some reports, Victoria’s reference to things ‘spiralling out of control’ could refer to a full-blown row with Mel B, who allegedly swore at her for ‘initially agreeing to reunite, then pulling out’.

Perhaps this should be taken with a pinch of salt, though, as Emma Bunton posted a friendly enough-looking shot of the fivesome after their gettogether. 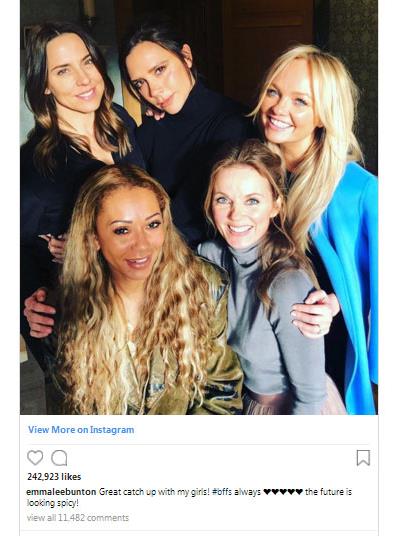 Whatever the case, the chances of Two Becoming One on this issue, and the whole band appearing on stage together again some day, seem remote.

PREVIOUSPete Davidson out of picture after Ariana Grande split