The leather jockstrap — worn by Crowe in Cinderella Man — was up for sale as part of the Gladiator star’s ‘Art Of Divorce’ auction — a sale held at Sotheby’s to finance Crowe’s divorce from his ex Danielle Spencer.

But why would Brit comedian Oliver want to own Russ’s intimates? Or as he put it: ‘$7,000! That is a big price to pay just to find out what Russell Crowe’s balls smelled like in 2005.’

Well, the unlikely answer is: to keep one of the last remaining Blockbuster video stores — located in Anchorage, Alaska — in business. 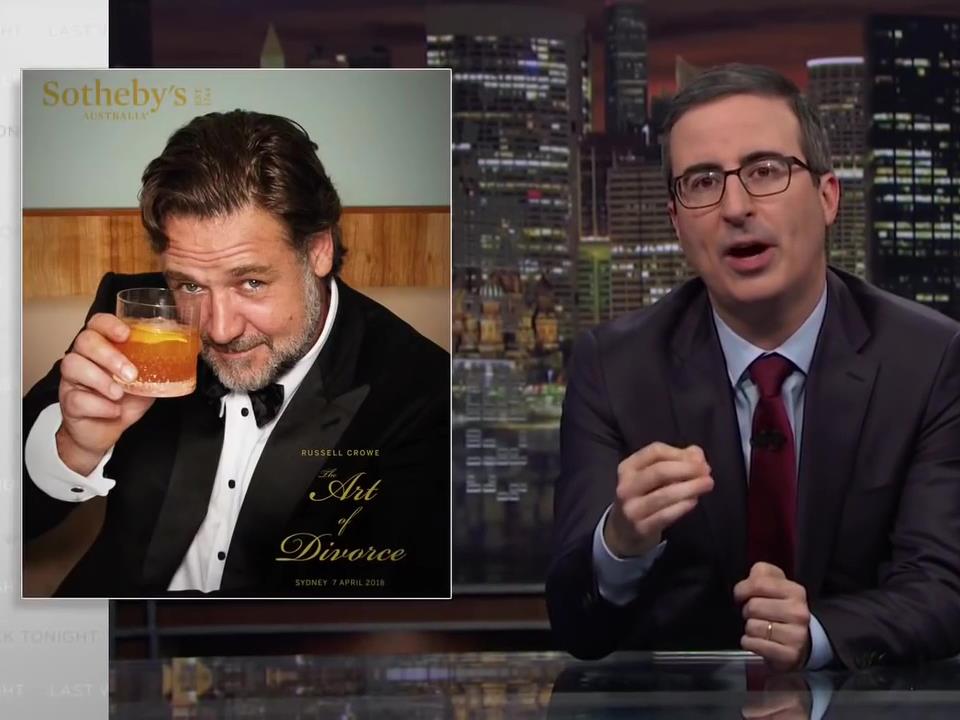 But Oliver couldn’t resist teasing regular viewers of his US show Last Week Tonight, initially seeming to quash rumours that the HBO show had made the winning bid.

‘There has been some speculation out there that we were the ones who bought that jockstrap — and I will admit it does sound like something that we would do,’ he said. ‘You know, buy Russell Crowe’s jockstrap and send it to one of the last remaining Blockbusters in Alaska. Even that sentence is absolutely incredible to say out loud.

‘The bad news is, we didn’t do it. I’m sorry,’ he said, before adding gleefully after a pause. ‘We did, though… we did. We absolutely did.’

And his online shopping spree didn’t stop there. Joking that ‘you know what happens when you start online shopping late at night’, Oliver admitted also purchasing: Crowe’s director’s chair from American Gangster for $2,928; Denzel Washington’s chair back from same film for $3,660; and the hood from Robin Hood for $13,420.

That lot should keep Anchorage’s Blockbuster in popcorn for some time to come.