PLENTY of steamy action Love Island has seen the show become one of the year’s surprise TV hits.

Monday’s episode had an average of 1.8 million viewers with a peak of two million according to overnight ratings.

Monday’s audience numbers were just slightly down from Sunday’s ratings — the biggest the show has ever had — which saw it break the two million mark with an average of 2.1 million and peak of 2.4 million viewers.

These marked the highest ratings on ITV2 since an episode of The Xtra Factor in October 2012 got 2.2 million.

The raunchy reality show sees a host of good looking singletons thrown together in a Majorcan holiday villa for eight weeks in the hope of sparking romance in full view of more than 72 TV cameras.

Viewers were left shocked by last night’s episode after witnessing randy reunited couple Kem Cetinay and Amber Davies indulging in some romantic action on the sofa in the living room, just feet away from sleeping couple Jonny Mitchell and Tyla Carr.

Couple Olivia Attwood and Chris Hughes also appeared to be getting intimate in the shared bedroom.

And Montana Brown spent the night in the villa’s secret hideaway with her new partner Alex Beattie. 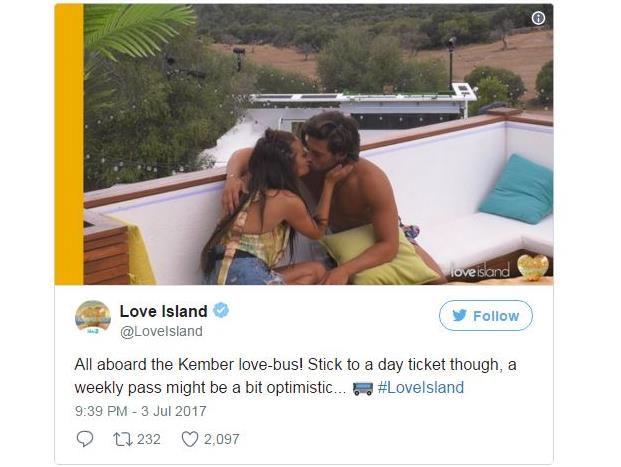 Sunday’s episode saw a huge culling of housemates, with several of the recent new additions being sent home as well as original islander Dominic Lever.

PREVIOUSJay-Z: Black heroes are boxed in by fame

NEXTYou should go and lug yourself… Justin Bieber’s baggage problem