ZAYN has said he won’t wave the white flag in his ongoing battle against anxiety — as he teased a stage return.

But the Let Me singer says he is dealing with his demons, so can he perform live again.

‘I’m working on that at the minute. I’m actually rehearsing and getting a show together,’ he told Beats 1’s Zane Lowe. ‘I feel more confident and like I want to be more at the forefront of things,’ he added. 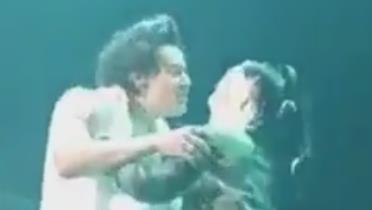 ■ HARRY STYLES thanked support act Mabel for hitting the road with him — by throwing a cream pie in her face. The ex-One Direction star, 24, pulled the messy prank on the 22-year-old singer as they closed the European leg of his tour in Dublin on Monday. ‘At least it was vegan,’ Mabel quipped.

NEXTShe’s such a Dua leaper on stage