Zoe Ball shares her ‘anxiety’ on taking over from Chris Evans

ZOE BALL asked whether ‘the anxiety dreams ever stop?’ as she was named the first female host of the Radio 2 Breakfast show today.

The 47-year-old former ladette will follow in the ‘giant footsteps’ of Chris Evans, who earns at least £1.6million for the role, and his predecessor Sir Terry Wogan on the UK’s most listened-to radio programme.

Ball previously made history as the first solo female Radio 1 breakfast show host in the 1990s.

After weeks of speculation, Ball dropped in on Evans, 52, in his Radio 2 studio to make what she called the ‘bonkers’ announcement.

‘I am a crazy mix of elation, wanting to burst into tears, thinking about running away, everything. But mainly thrilled,’ she told the DJ, who is moving to Virgin Radio.

‘I definitely didn’t expect to get a call, but getting a call was an amazing thing,’ she said.

‘To be the first woman to present this very special show is both an honour and privilege.’

Ball said that taking up the job was ‘somewhat daunting’ and added: ‘You think, “I can’t do it. How can I do it?”‘

But her teenage son helped her make up her mind.

‘The best person I spoke to during that time was my son Woody, who’s nearly 18. He wasn’t even alive when I was at Radio 1 doing the Breakfast Show.

‘He said: “Mum, come on. Don’t even think about it. It’s the coolest thing you can do.

“Be the first girl on Radio 2 Breakfast. It’s amazing.” He looked into my eyes and said: “Someone will listen.”‘

But Zoe’s younger daughter Nelly could be more difficult to win over, telling Ball: ‘I’ll probably listen to Greg [James on Radio 1], but if he plays a bad record, mumm,y I might listen to you to see if you’re all right.’

Ball said she will have to ‘see how it goes’ when it comes to continuing to host Strictly Come Dancing’s spin-off show It Takes Two, saying: ‘I’m really hoping I can do both.’

She told Evans she had ‘only’ known she had the new job, which she will take on next year, for a matter of ‘weeks’.

And she joked to the DJ, who will be her breakfast show rival once again: ‘Will you leave some of your listeners? I know a lot may go with you, Chris.’

Admitting nerves, she asked: ‘Do the anxiety dreams ever stop? Will I ever sleep again?

Evans, who recently became a father to twins, said: ‘It’s one of the best jobs in this business, as you know… You really light up the radio.’

Not everyone agreed, however, with some negative reactions on Twitter.

One user posted: ‘What’s the Virgin frequency? Was hoping it would be Sara Cox. Not a fan of Zoe Ball.’

Another accused the BBC of ‘southern bias’ for not appointing northerner Cox. 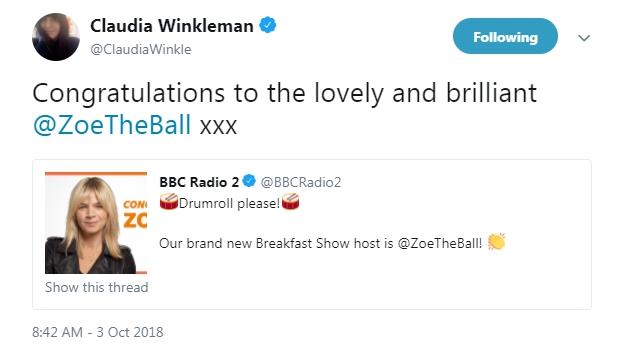