KRISTEN STEWART compared her taste in lovers to enjoying cheese on toast as she explained why she is up for dating a fella again.

However K-Stew, also 27, says men aren’t off the menu and she could ‘yeah, totally. Definitely’ fall in love with a man once more.

Using food as an analogy for her sexuality, she hinted the right man could still melt her heart.

‘Some people know they like grilled cheese and they’ll eat it every day for the rest of their lives,’ she said. ‘I want to try everything. If I have grilled cheese once I’m like, “That was cool, what’s next?”’

And, in what appears to be an assurance to R-Patz and her former boyfriends, she told Harper’s Bazaar: ‘I’ve been deeply in love with everyone I’ve dated. Did you think I was faking it?’ On coming out, she added: ‘I’ve always embraced a duality. And really, truly, believed in it and never felt confused or struggling. I just didn’t like getting made fun of.’

The Personal Shopper star says she was bullied at school when she dressed like a boy, being made to feel it was ‘not the most normal thing’.

She explained: ‘Not all little girls are that way. And it really hurt my feelings, like badly. I remember being in the sixth grade [aged 11] and [people would say] “Kristen looks like a man. You’re a boy”, or whatever, and I was so offended, horrified and embarrassed. 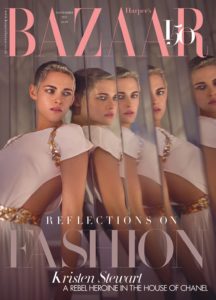 After navigating her growing pains in the spotlight, K-Stew now feels fame ‘is valued quite ridiculously’.

And as for expectations to explain her love life, she said: ‘There’s this idea that you’re beholden in some way, and I resent that.

‘And it comes across like I’m ungrateful or something but, actually, I just find it weird to talk to the general public as a whole.’

■ K-STEW called having Donald Trump as US president a double-edged sword for women. ‘It’s obviously terrible what’s happening but at the same time it feels good to be part of a wider female community that is finally standing up for itself,’ she said.

Read the full interview in the September issue of Harper’s Bazaar UK, on sale today.

NEXTIt’s my job to be the Morning Glory taker, says ‘cliché’ Liam Gallagher